Funeral arrangements are pending at the Murphy Funeral Home of Mt. Pleasant.

Larry was born on June 28, 1943, in Fairfield the son of Raymond C. and Wilma L. (SPRAY) SWANSON. He graduated from Fairfield High School in the class of 1962. Larry enjoyed his time outside hunting, fishing, trapping and sitting around a good bond fire (sic). He was very musical, able to play the piano by ear, and the harmonica.

He worked for a milk company in Burlington then as a welder for CECO Building Systems and retired from Iowa Wesleyan College as a security officer.

He was preceded in death by his parents, and three daughters, Robin Kay SWANSON, Nikki KEWIS, Lara HARDIN, and his lifelong companion Jan HIETMEIER.

Larry's family will receive friends on Thursday, March 14, 2019, from 5 to 6 p.m. at the Murphy Funeral Home of Mt. Pleasant. Following the visitation a Celebration of Life Service will be held at 6 p.m. with Rev. Earl Swigart officiating. Cremation has been entrusted to the Murphy Funeral Home and private family burial will be held at a later date at the Lockridge Cemetery. Memorials may be directed to the Lockridge Cemetery or the Lockridge Baptist Church in his memory.

Murphy Funeral Home of Mt. Pleasant is caring for his arrangements. 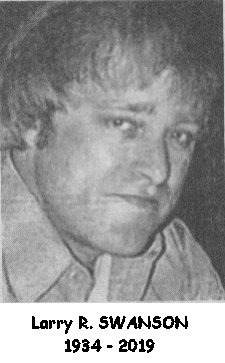