Funeral service will be 1:00 pm, Tuesday, January 29, 2019 at Behner Funeral Home with Reverend Joseph Phipps officiating. Burial will be at Memorial Lawn Cemetery.

Bud was born October 29, 1922, in Fairfield to Clyde W and Eva (MITCHELL) DIMMITT. He graduated from Fairfield High School Class of 1941. Bud lived in the Fairfield area all his life.

Bud married Erma Eilene SMUTZ, daughter of Harley & Ellen SMUTZ at her parents' home S.E. of Fairfield on August 28, 1943. To this marriage was born two daughters, Sheryl and Brenda.

Bud worked at Louden Machinery from 1941 to retirement in 1984. He was also a volunteer fireman for Fairfield Fire Department for 30 years retiring in 1982 as Assistant Fire Chief. 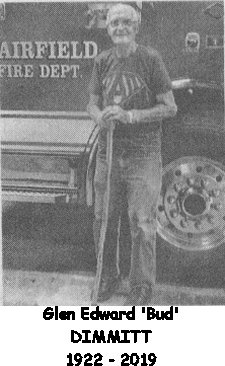