Ronald James LONG, 83, passed away Saturday, September 29, 2018, after an extended struggle with Alzheimer's.

Funeral service will be 10:30 am, Thursday, October 4, 2017, at Church of the Nazarene with Pastor Howard Innis & Pastor Dick Allen officiating. Burial will follow the service at Evergreen Cemetery.

Memorials can be made to the Alzheimer's Association. Cards and memorials may be mailed to 702 Hillside Drive, Fairfield, Iowa 52556.

Ron was born February 16, 1935, in Fairfield to Maurice "Shorty" Kinley LONG and Portia Mae HARPER LONG. He attended Wheaton Academy in Chicago, IL and graduated from Fairfield High School in 1954. He went to attend John Brown University in Siloam Springs, Arkansas. While there, he obtained his pilot's license.

On March 10, 1957, he was united in marriage to Mary Louise HEAD of Promise City, IA and they celebrated 61 years of marriage.

He joined the Air Force in June of 1957. After basic training, he was stationed at Whiteman Air Force Base in Knob Noster, MO, as a B-47 jet engine mechanic. He received an early honorable discharge in 1960 to return to Harper Brush Works, as Shop Supervisor, upon the death of his uncle, Paul HARPER. In 1972, he founded Long Manufacturing Company, which he operated for 36 years.

Ron was active in the Christian Business Men's Association, Wisemen's Club and Fairfield Manufacturing Association and a longtime member of the Lion's Club. He served on numerous religious and civic boards and committees. Ron was on the Fairfield Public School Board for 12 years.

Ron was preceded in death by his parents; brothers, Stanley and Richard, and son, Scott. 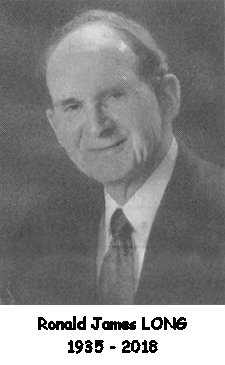