Allen Clarence JONES was born July 28, 1944 in Ottumwa, IA to Ralph and Floy BAKER JONES. He grew up in Hedrick, IA and graduated with the Hedrick High School Class of 1962. During his youth he grew his appetite for adventure through activities such as unicycle riding, water tower climbing and hitchhiking to Florida. He went on to the University of Iowa where he spent one year before transferring to Northeast Missouri State University where he competed in the pole vault for the track team as well as competing on the gymnastics team.

He graduated with a degree in physical education and began his teaching career in LaPlata, MO before moving to the Cardinal Community Schools in Eldon. In 1967 Allen married Ronna Lea ABEL. The two became the loving parents to two children; Todd and Traci. While teaching at Cardinal, Allen entered the United States Air Force. He proudly served his country until his honorable discharge in May of 1973 and resumed teaching at Cardinal. Allen began teaching at Fairfield Junior High in the mid 1970's (sic) and transitioned to the high school math department later in his career. He channeled his love of sports by serving as assistant girls' basketball and head girls tennis coach. In 1996 he met LuAnne after the two were set up by a close friend, Mary Hill. This began a 22-year journey together. During his time LuAnne's son Josh became a loving stepson to Allen. They were married in 2006 in their home, surrounded by family and friends. Allen retired after 35 years of dedicated service to education. He continued to substitute teach when needed and transport cars for Smithburg Automotive in Fairfield. Allen spent Wednesdays at High-T and Thursdays golfing with the "Umbrella Fellas" from the Walton Club, often enjoying a pitcher of beer with "friends".

He was a talented athlete and welcomed friendly competition in everything including, golf, ping-pong, bags, pool and darts. He always had sports on TV and paid close attention to the Hawkeyes, Cubs and Packers. Allen also participated in RAGBRAI for over 20 years, many of which were sheared with his son, Todd. Above all the friendly competition and jokes, Allen was a true old school gentleman. He was a loving husband and father who cared deeply, not only for his family but his many friends. His presence here will be missed by his family and the many friends he made along the way.

Allen was preceded in death by his parents, one sister, Helen BALL; one brother-in-law, Verne BALL and a sister-in-law, Shirley JONES. 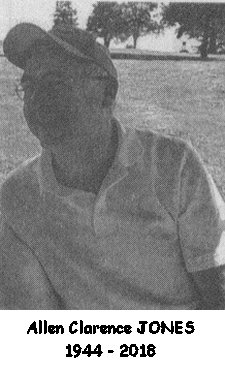