Funeral service will be 10:30 am, Saturday, December 30, 2017, at Behner Funeral Home with Pastor Danny Cary officiating. Burial will be at Antioch Cemetery.

In-lieu of flowers, a memorial has been established. Cards and memorials can be mailed to: Vincent JAEGER, 2146 241st Street, Fairfield, Iowa 52556.

Becky graduated from Fairfield High School Class of 1973. She worked at Plexco and helped her husband on the farm. After her husband passed away she and her boys did the farming. Becky was a member of the Fairfield Women's Club McElhinny House, Jefferson County Master Gardeners and served on the Jefferson County Agriculture Extension. Becky was a familiar face at the Fairfield Farmers' Market. During the summer she would sell raspberries. Becky was always an independent woman who had boundless energy and cared about mankind and respecting our planet Earth. As one of the leading organic farmers in SE Iowa, Becky was willing to explore new challenges to assist in the protection of our fragile ecosystem. She was generous with her time and spirit and truly enjoyed giving to her family, friends and neighbors.

She was preceded in death by her parents, Eugene and Millicent EHRHARDT; her husband, Ambrose JAEGER; and one brother, Robert EHRHARDT.

On-line condolences can be made to the family at behnerfh.com. 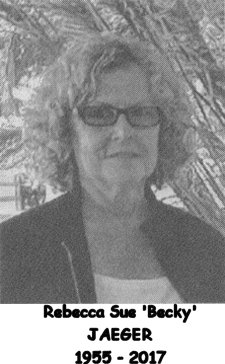