Raymond Frank FRONCZAK, age 90 of Hudson, passed away peacefully at home on November 14, 2017. He was born on June 16, 1927 to Frank and Mary (DOBESH) FRONCZAK in Chicago, IL. Ray attended Maternity BVM Elementary School, and graduated from Lane Tech High School in northern Chicago with the class of 1945. During high school, Ray won a letter in speed skating. He also competed in the Silver Skate competition, where he was superseded only by one young man who eventually competed in the Olympics. He enlisted in the Navy following his high school graduation, and served in the Pacific as a Motor Machinist Mate. Raymond graduated in 1956 from St. Norbert College in De Pere, WI, with a degree in Business Administration. Upon his honorable discharge from the Navy, Ray also attended the University of Illinois at Navy Pier for one and a half years. On August 6, 1955, he was united in marriage to Margherita "Meg" GALASSINI at St. Jacohim (sic - St. Joachim) Church in Chicago and together they were blessed with five children.

Ray always enjoyed spending time with his family; he relished in their travels to resorts, as well as setting sail aboard cruise ships accompanied by his loved ones. He intensely followed the success of his children and grandchildren throughout their many sporting events and school-related activities. In his later years, Ray migrated south to warmer weather in Florida during the chilly Wisconsin winters. As a die-hard Chicago Cubs fan, Ray was beyond thrilled to see the team (finally) win the World Series in his lifetime. He also favored the Green Bay Packers and Iowa Hawkeyes.

Raymond possessed a passionate and intense work ethic; he worked as an accountant for numerous years before becoming a part of the sales team at The Vernon Company in Newton, IA. His outstanding dedication to sales was met with numerous awards. Ray became a Commodore of the American Legion Post of Fairfield, IA, as well as a 4th Degree Knights of Columbus Grand Knight for St. Mary's Catholic Church of Fairfield, before moving to the Hudson area. As a resident of Hudson, he was also established as a 4th Degree K of C.

A Visitation will be held on Friday, November 17, from 4:30-7:00PM, with a prayer service at 6:30PM at the O'Connell Family Funeral Home, 520 S. 11th St., Hudson, WI. Mass of Christian Burial will be held on Saturday, November 18, at 11:00AM at St. Patrick Catholic Church, 1500 Vine St., Hudson, WI with a visitation one hour prior to Mass. Interment will take place at St. Patrick Catholic Cemetery.

Donations to St. Pat's Parish, Woodland Hills Piano Fund, American Cancer Society, the Hudson High School Music Program, or a charity of your choice are welcomed in lieu of flowers. 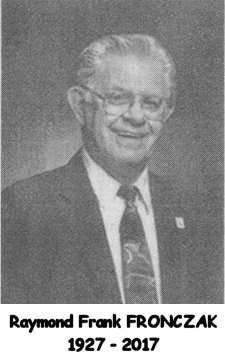