Visitation will begin after 12 noon on Wednesday, October 18, 2017, at Olson~Powell Memorial Chapel of Mt. Pleasant, where the family will greet friends from 5:00 to 7:00 p.m. that evening. A funeral mass will be held at 10:00 a.m. on Thursday, October 19, 2017, at St. Alphonsus Catholic Church, with the Rev. Paul Connolly, celebrant. Burial will be in Lockridge Cemetery. Gifts of love and friendship may be given to St. Alphonsus Altar and Rosary Society. On-line condolences may be directed to www.olsonpowell.com.

Following high school, for three years, Mamie worked at Sheaffer Pen in Ft. Madison, IA and later for Universal Producing in Fairfield, IA, for 26 years. For eight years, prior to retiring, Mamie was a staff assistant at Jerry's Restaurant.

A member of St. Alphonsus Catholic Church, Mamie's family, church family, and friends were very important to her. She enjoyed helping her husband farm, going to dances, and having morning coffee with friends. Mamie also loved traveling often, and with a special fondness for the Branson trips.

Along with her late husbands, Mamie was preceded in death by a brother, Wayne CLARK; a step-daughter, Irma Jean MERSCHMAN; a step-son, Donald MOELLER; and a step-grandson, Steven MERSCHMAN. 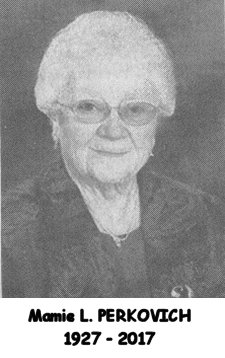