A memorial service will be 11:00 am, July 7, 2017, at the First United Methodist Church with Chaplin (sic) Don Combs officiating. Military rites will be after the service at the church. Burial of cremains will be at a later date at Memorial Lawn Cemetery.

In lieu of flowers, memorials can be made to VFW, Fairfield Lions or United Methodist Church. Cards and memorials can be mailed to: 204A Southgate Circle, Fairfield, Iowa 52556. Earl was born May 27, 1928 to Clive and Mary Belle (WATERHOUSE) GRIMES in Libertyville, IA. He married, the love of his life, Mary Elizabeth NICHOLSON July 3, 1954, at the First Christian Church with Pastor Sam Williamson officiating This July they would have celebrated 63 years of marriage.

Earl graduated from Fairfield High School with the Class of 1946. He served in the Army during the Korean War (sic - Korean Conflict) from 1950-1952. Earl was co-owner/auto mechanic of B & G Sinclair Service with Butch Barnes for over 30 years. He was a life time member of the VFW. Earl was a longtime member of the Lions Club. He received the Warren Coleman award in 1999 and was Lion Of The Year in 2003. His activities in the Lions was being head of the broom and light sales, along with being a paper carrier to raise money for the club. He also worked with Ed Felgar during the White Cane Day fund raisers. He was a member of the First United Methodist Church. Earl farmed his acreage with crops and cleared ground for cattle. He liked to collect coins, play cards and travel out west. Earl loved his family very much.

He was preceded in death by his parents, Clive and Mary Belle; and four grandparents.

Online condolences can be made to the family at: behnerfh.com. 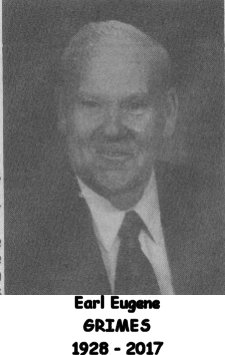