The funeral will be 11 a.m. Saturday at Hope Lutheran Church in Germanville, with the Rev. Ryan Dexter officiating. Burial, with military rites, will be at Lockridge Cemetery.

Mr. ZIHLMAN was the first man to leave Fairfield to serve during World War II. He was stationed with the U.S. Army in Africa and Italy.

He worked at the Iowa Ordinance Plant in Middletown for 25 years as a light equipment operator.

He was a member of the Eagles, VFW and American Legion. His pastimes included raccoon hunting, mushroom hunting, playing cards and spending time with family and friends.

Survivors include: wife Elsie of Fairfield; and sister Helen WIXOM of Keokuk. 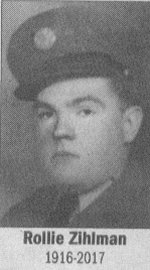