The funeral will be 10 a.m. Thursday at First Lutheran Church in Fairfield, with the Rev. Greg Friedrich officiating. Burial will be at Spencer Cemetery in Stockport (note: in Van Buren Co., IA).

Visitation will be 5-7 p.m. Wednesday at Behner Funeral Home in Fairfield.

Mrs. GODWIN lived in the Fairfield area all her life. Her pastimes included working in her flower or vegetable garden, playing Mrs. Claus, square dancing, traveling and spending time with family and friends.

She was preceded in death by: her parents; her husband, Dwane GIBERSON; and stepdaughter, Angie FRIES. 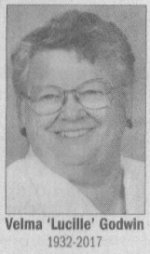