A private graveside memorial service will be held at Evergreen Cemetery in Fairfield, with the Rev. John McDonald officiating.

Behner Funeral Home in Fairfield is assisting the family.

Mrs. WELCH was born March 15, 1925, in Richland, the daughter of Lowell and Mattie TALLEY LAKE. She married Hubert HOSKINS Sept. 23, 1944. They later divorced, and she married Donald WELCH. He preceded her in death.

Mrs. WELCH attended school in Richland and graduated in 1944.

She worked in various departments at Easter's and Hy-Vee grocery stores.

She was an avid Hawkeye football and basketball fan. She enjoyed purchasing and then reselling antiques. Spending time with her children and grandchildren were of most importance to her.

In addition to her second husband, she was preceded in death by: her parents, Lowell and Mattie LAKE; two brothers, Lorell and Everett LAKE; two sisters, Eva REIGHARD and Blanch BLANDING; one daughter, Charlene IBBOTSON; and one son-in-law, John IBBOTSON. 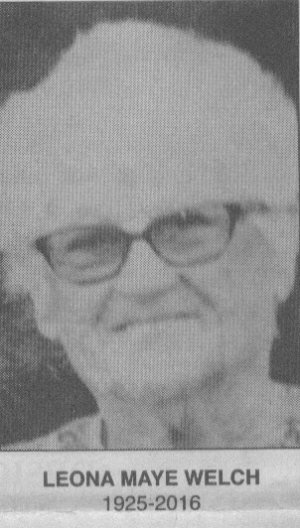