Visitation for family and friends will be Friday, October 31, 2014 at 6:00 pm - 8:00 pm at Behner Funeral Home & Crematory. Cremation will follow the visitation. Burial of cremains will be at a later date.

Memorials can be made to American Diabetes Association or Jefferson County Health Center Auxiliary. Cards an be sent to: 712 West Tyler, Fairfield, Iowa 52556.

Judith was born January 31, 1945 to Sydney and Caroline (BERG) ZUCKER in New Brunswick, NJ. She married Bob Gene ROBINSON July 11, 1965 and was married 48 years before he passed away August 30, 2013. Together they had two children, Melissa ROBINSON and Matthew ROBINSON.

Judith is survived by her two children, Melissa ROBINSON of Muskegon, MI and Matthew ROBINSON of Fairfield, IA; one grandson, Derek ROBINSON; one sister, Sandra "Gail" BRAUNSTEIN of Arlington, VA; and many nieces and nephews.

She was preceded in death by her parents, Sydney and Caroline ZUCKER; and her husband, Bob ROBINSON.

On-line condolences can be made at: behnerfh.com. 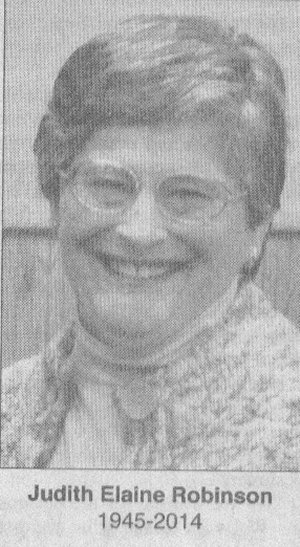