On-line condolences can be sent to: behnerfh.com

The funeral is scheduled for 10:30 a.m. Friday at First Lutheran Church in Fairfield, with the Rev. Stacy Grau officiating. Burial will be at Memorial Lawn Cemetery in Fairfield.

Visitation for family and friends is set from 6-8 p.m. Thursday at Behner Funeral Home & Crematory in Fairfield.

In lieu of flowers, memorials can be made to First Lutheran Church, Faith United Methodist Church, Libertyville or the donor's choice. Memorials and cards can be sent to 611 W. Harrison Ave., Fairfield 52556.

Mrs. LANGNER graduated from Libertyville. She worked at the Iowa Army Ammunition Plant in Middletown, Inez's Fashion in Fairfield and as a cook for the Fairfield school district for 28 years.

She was a member of First Lutheran Church. She liked to play cards, do word-search books and to cook and bake.

Survivors include: one son, Jerry LANGNER of Fairfield.

In addition to her husband, she was preceded in death by her parents; one infant daughter, Mary Ann LANGNER; and one brother, Max E. STANSBERRY. 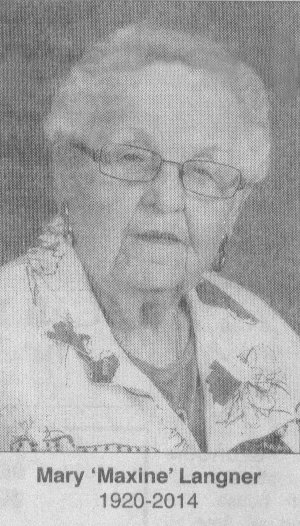