A graveside service is at 11 a.m. Thursday at Union Cemetery (sic - Germanville Union Free Cemetery) near his home, with the Rev. Robert Spilger officiating.

There is no visitation.

Gould Funeral Home in Brighton is in charge of arrangements.

Mr. HOEFER was born May 3, 1916, on the home farm near Germanville, the son of George and Pauline SCHMIDT HOEFER. He married Erma Lucille SHUPPY Oct. 8, 1948, in Kahoka, Mo.

He lived his entire life on the family farm and attended Germanville country school Walnut No. 5.

He was a lifelong farmer and worked for The Dexter Company in Fairfield for 25 years.

He served in the U.S. Army during World War II.

He played baseball and softball for 27 years.

Survivors include his wife Erma.

He was preceded in death by his parents; two brothers, Paul and Ethiel Otto "Nick" HOEFER; and three sisters, Ethel HASS, Marie FANNING and Esther BUSH. 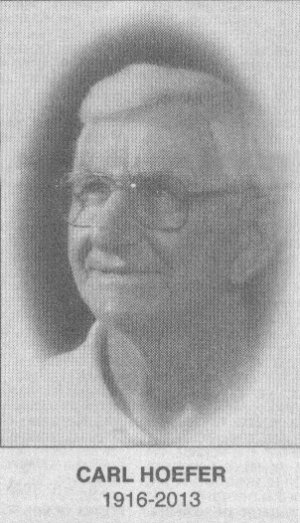