A funeral is at 10 a.m. Saturday at First Lutheran Church with the Rev. Stacy Grau officiating. Burial will be at Memorial Lawn Cemetery in Fairfield with military rites by the 34th Army Band, Iowa Army National Guard.

Visitation for family and friends is 5-8 p.m. Friday at Behner Funeral Home.

Mr. KRUMBOLTZ was born Jan. 24, 1939 in Fairfield, the son of Dale Lawrence and Mildred Amelia WILDMAN KRUMBOLTZ. He married Karen Louis PAMPEL July 1, 1967, at the Methodist church in Williams, Iowa.

After graduating from ISU he lived in Webster City and Creston for 12 years as an Allis Chalmers District Manager.

In 1973 he moved back to Fairfield and was a self-employed farmer for 40 years.

He pioneered no-till farming during his career with Allis Chalmers. He demonstrated this innovation at countless test plots across Iowa and at the Farm Progress Show.

He implemented no-till as he began his farming operation in rural Fairfield. He loved working on the farm and was an FFA Honorary Chapter Farmer, Iowa Soil Conservation Award winner and Iowa Master Corn Grower.

He enjoyed waterskiing and teaching others to waterski.

He was a member of the First Lutheran Church in Fairfield.

He had been a member of city council, Elks Lodge No. 1192, Farm Bureau and Lions Club, having served as a Tail Twister. 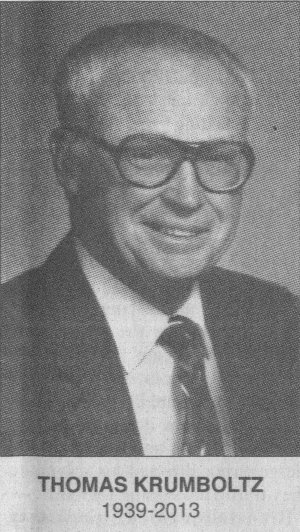