A memorial service is planned at 7 p.m. Friday at Behner Funeral Home in Fairfield, with words of comfort by Steve Pfeifer. Burial of cremains will be at a later date.

Visitation for family and friends will be 5-7 p.m. Friday, prior to the service, at the funeral home.

Teresa Ilene BRUEGGE was born March 8, 1968, in Fairfield, the daughter of Edward A. and Nikki L. CROW BRUEGGE.

Ms. BRUEGGE lived most of her life in the Fairfield area. She graduated from Fairfield High School with the Class of 1986. She enjoyed camping and outdoor activities.

She was preceded in death by her grandparents, Adrian CROW, Eddie BRUEGGE and Leona BRUEGGE.

A long-time Fairfield resident is still missing after local law enforcement has searched for her for several days.

The Henry County Conservation Department discovered BRUEGGE's silver 1992 Dodge Grand Caravan at 9:51 a.m. Friday. The car was found at the end of a boat ramp at Faulkners Access on the Skunk River near Oakland Mills County Park.

BRUEGGE is described as a white female, 5 feet 6 inches tall, approximately 300 pounds, with a shaved head. She was last seen wearing blue shorts, a gray t-shirt, blue jacket and a tan cap.

Henry County Sheriff Rich McNamee said the search party has searched for BRUEGGE with airplanes, boats and on foot. He said the DNR planned to continue searching on the Skunk River but that has become difficult the past few days because of the freezing temperatures.

"The river was thawing the day we found the car," he said. "Now it's freezing back over. There's an ice jam up river, and you don't want a boat to go through an ice jam."

McNamee said nothing seemed suspicious about BRUEGGE's car when it was discovered Friday, but law enforcement was still cautious about jumping to conclusions.

"When we have an unknown, where we don't know if it's a critical crime or a missing person, we treat it as the most serious crime applicable," he said.

Samatha STARR, BRUEGGE's niece, said all of BRUEGGE's family lives in Fairfield and that BRUEGGE has spent 90 percent of her life here. STARR said BRUEGGE was last seen Thursday.

Law enforcement officers request anyone with information about BRUEGGE to contact the Henry County Sheriff's Office at 319-385-2712.

Fairfield Police Chief Julie Harvey said her department also will forward any information about BRUEGGE to the Henry County Sheriff's Office. The number of the Jefferson County Law Center is 472-3576.

The photo that accompanies this story is believed to be one or two years old.**

HAMILTON, Ill. (AP) -- The body of a missing Iowa woman has been found floating in the Mississippi River near the western Illinois city of Hamilton.

Hancock County Sheriff Scott Bentzinger said an autopsy was planned today. Police in Henry County in Iowa have been looking for BRUEGGE for four weeks. She went missing Feb. 14.

The Ledger will have more coverage of this story in Friday's edition.

HAMILTON, Ill. -- The body of Teresa BRUEGGE, a long-time resident of Fairfield, was found Wednesday in the Mississippi River, about 3.5 miles north of Hamilton, Ill., which is across the river from Keokuk.

A resident in Hancock County spotted the body Wednesday and notified the sheriff's office. After the body was recovered, it was sent to Bloomfield, Ill., for an autopsy.

BRUEGGE, 45, who most recently lived in Mount Pleasant, had been missing since Feb. 14. Her parents and most of her family reside in Fairfield. A relative said BRUEGGE was last seen Feb. 14.

Henry County Conservation Department found BRUEGGE's silver 1992 Dodge Grand Caravan at the end of a boat ramp at Faulkner's Access on the Skunk River near Oakland Mills County Park the morning of Feb. 15.

The sheriff's office, conservation department, Iowa State Patrol and Iowa Department of Natural Resources searched the area around Faulkner's Access and broadened the search in the following days using airplanes, boats and searchers on foot. Freezing temperatures and ice jams on the river slowed the river search in late February.

The Skunk River deposits into the Mississippi River at the border of Iowa counties Des Moines and Lee, in an area known as Blackhawk Bottoms, and slightly north of Lomax, Ill., across the river. Driving from Lomax to Hamilton, Ill., is just under 30 miles on Illinois Highway 96.

The area where BRUEGGE was found had not been previously searched. It is believed that the recent flooding caused river currents to take the body to the location in which it was found, according to the Mount Pleasant News.

"We searched from where her van was located at Faulkner's Access down river for several miles, because in a situation where someone is presumed to have drowned or possibly drowned, they sink right away," said Henry County Sheriff Rich McNamee. "We formed a perimeter of search that was relevant to the climate and the circumstances. Obviously with the flooding over the last few days, it moved her."

Arrangements are pending at Behner Funeral Home and Crematory in Fairfield.

**Note: The photo in this posting was the one included with her obituary. Her photo in the March 15th story showed her with her hair pulled back; this same photo was also used in the February 20th story. No photo was published of her with a shaved head in either obituary or any of the three stories. 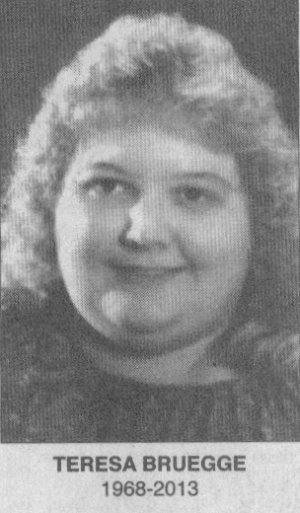