According to his wishes the body has been cremated. A memorial service will be held in Fairfield at a later date.

Memorials can be made to the First Augustana Lutheran Church in Lockridge, Ia. Cards can be sent to 219 N. 88th St. Mesa Arizona 85207.

Keith Ralph JOHNSON was born April 5, 1926 to Ralph Finley and Mary Josephine SCHILLERSTROM JOHNSON in Fairfield, Iowa. He married Jo Ann ANGSTEAD on August 19, 1951 at the First Christian Church in Fairfield. She survives.

Keith graduated from Fairfield High School class of 1944 and continued his education at Parsons College.

He had lived in Fairfield for 64 years and moved to Arizona in 1990. Keith was an oil jobber for Sinclair Refinery Co. and Skelly Oil Co.

He attended the Lutheran Church.

Keith was preceded by: his parents, 2 Brothers, Jerry D. and Richard F. JOHNSON.

A memorial service is at 1:30 p.m., Friday at Behner Funeral Home & Crematory officiated by the Rev. Stacy Grau. The body has been cremated. Burial of cremains with military rites will be at Memorial Lawn Cemetery in Fairfield.

Memorials may be made to First Augustana Lutheran Church in Lockridge.

A full obituary was published in the Feb. 22 Ledger. 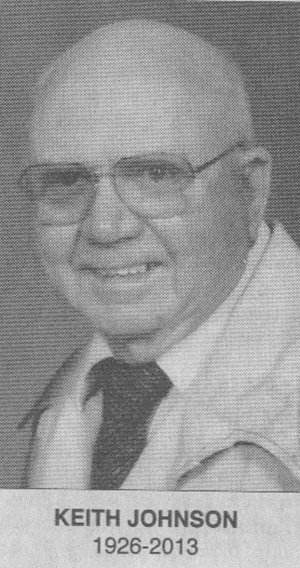