Tsune "Keiko" WILSON age 86, of Fairfield, passed away December 15, 2012 at her home. Private Graveside services will be held at a later date.

Tsune's hometown was on a small fishing island off the southern coast of Japan. She went up into the mountains every day to fetch firewood and water, and she also helped with the gardening. Even though her father was a fisherman, she became sea sick whenever she went of a fishing trip. Her father also made tofu for a living.

Tsune's brother, Toshiko, was in the Japanese navy during WWII. His ship was sunk during a large battle with the US navy in the south Pacific. Of all his shipmates, Toshiko was the sole survivor.

At the age of 18, Tsune left her island for the first time for Fukuoka where she met her husband, a soldier in the US Army. She emigrated to the US in 1955 with her husband, son, and first daughter.

Tsune has been a resident of Fairfield for 23 years. She practiced TM for 37 years, and attended the group program in the Ladies Dome for 14 years. She was a homemaker, and her hobbies include Gardening, Flea markets, and Collecting dolls and Depression glass.

Tsune was a simple, kind, and good mother who loved her family as much as her own self. 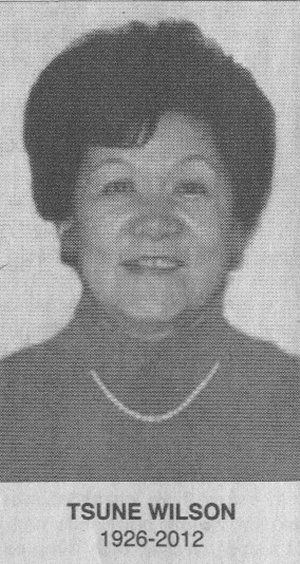