Memorials may be made to the First United Methodist Church. Cards and memorials can be sent to LuAnn DAVIS at 204D Southgate Circle, Fairfield, Iowa 52556.

A memorial service will be held at 10:30 a.m. Tuesday, November 6, 2012 at the First United Methodist Church with Pastor Nate Nims officiating. Burial will be in Memorial Lawn Cemetery. Jerry was born February 18, 1935 in Bentonsport, to Orrie and Florence FUNK DAVIS. He married LuAnn GORMAN on June 26, 1954 in Batavia, Iowa.

He worked at Iowa Malleable Iron Co. for 40 years and 37 years at the Fairfield Fire Department, with 4 years of that being the Chief. He was a member of the Howard Johnson Coffee Club, Scout Leader for Troop 64, a Little League Coach, a volunteer for Habitat for Humanity and was on the Senior Center Board. He enjoyed camping fishing, hiking, bowling and woodworking.

He was preceded in death by his parents, 1 sister: Charlotte PRATT and 1 brother: James "Pug" DAVIS. 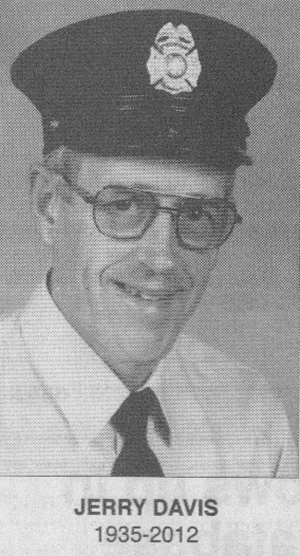