Jim grew up in the Lockridge community and graduated from Lockridge High School in 1953.

They lived in Fairfield before he served in the U.S. Army from 1957-1959 as an instructor of the NIKE Ajax and Hercules Guidance Missile systems for NATO.

Jim was a member of the First United Methodist Church in Fairfield.

He served on the Fairfield City Council for 10 years.

Jim was a 50-year member and served as a trustee of B.P.O. Elks No. 1192, a member of Kiwanis Club of Fairfield, Eagles Lodge (sic - Aerie/Club), Walton Club, A.A.R.L. (ham radio operators), a 50-year member of the Scottish Rites at Davenport.

Jim enjoyed life, working with his hands and helping friends.

He has put up long hard, long fight against his cancer that began in 1977.

His parents preceded him in death.

Surviving family members include his wife Jeralee, a niece Susan GRIFFIN of Fairfield, a nephew Alan PARSONS of Winfield, several great nieces and nephews, one great-great-nephew, three great-great-nieces and special friends, the Mike and Donna Lang family of Fairfield.

Cremation has been accorded.

A memorial service for Jim LARSON with Masonic Rites will be at 10:30 A.M. Wednesday at the First United Methodist Church in Fairfield with Pastor Nate Nims officiating.

The family will receive friends Tuesday evening from 5:00 until 7:00 P.M. at the Raymond Funeral Home in Fairfield. An Elks ritual will be begin (sic) at 7:00 P.M. Tuesday following the visitation

Private interment will be in the Lockridge Cemetery.

In lieu of flowers, the family requests memorials be made to the Lockridge Cemetery Association or to the Fairfield First United Methodist Church.

Raymond Funeral Home is assisting the family with arrangements. 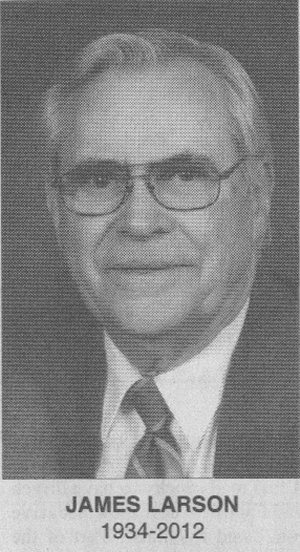