Funeral services will be held at 10:30 a.m. Wednesday, July 18, 2012 at Behner Funeral Home with Pastors Danny Cary and Frosty Van Voorst officiating. Burial will be in the Packwood Cemetery.

In lieu of flowers, memorials may be made to the Wolf Family for a general fund, to be determined at a later date. Cards and memorials can be sent to Lyle Wolf: 415 N. Main St. Packwood, Iowa 52580.

Judy was born September 24, 1939 at St. Joseph Hospital in Ottumwa, to Raymond Coleman and Juanita May FOLLMAN BRAGG. On September 2, 1955 she was united in marriage to Lyle WOLF in Fairfield, by the Rev. John Balensky. To this union, two children were born: Cheryl Ann SCHUTLZ and Allen Wayne WOLF.

Judy attended Packwood Consolidated School with the class of 1957 and played basketball for Packwood High School. She is a lifetime member of the Ollie Chapter Order of Eastern Star. She enjoyed playing cards, games, her children, grandchildren and great-grandchildren and especially rooting on her University of Iowa football and basketball teams. Judy started her employment at J&B Plastics in January 1964 and ended with Performance Pipe of Fairfield in February 2004 at the same location for 41 years.

She was preceded in death by her parents and her son: Allen Wayne WOLF, April 14, 2012. 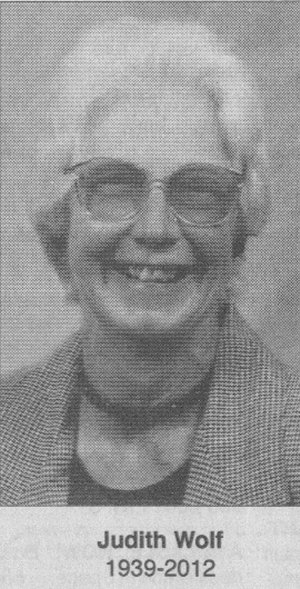