Dennis A. HORRAS, age 80 of Fairfield died Tuesday, June 5, 2012 at the University of Iowa Hospitals and Clinics in Iowa City.

Dennis lived most of his life in the Fairfield community area. He was a member of the Knight of Columbus (sic - Knights of Columbus). He served as usher since the age of 15 in the Catholic Church, 6 years on parish council, and others. He taught Christian education, escorted children to their retreats and did a lot of charitable acts through out the community. He served one year on the school board and 2 years on civil service commission for the police force.

Dennis married Mary Teresa SOBASKI on November 23, 1955. He was a farmer and a carpenter.

He was preceded in death by: his parents; 2 children: John and Tommy HORRAS; 3 sisters: Marge, Donna and Betty; 3 brothers: Wayne, Herbert (Dutch), and Walter Jr. HORRAS.

Funeral Service for Dennis will be 10:00 a.m. Saturday, June 9, 2012 at the SS Joseph and Cabrini Church in East Pleasant Plain with Father Robert Striegel officiating. Burial will be in the Memorial Lawn Cemetery in Fairfield.

The Family may receive friends on Friday from 6-8 p.m. at the Raymond Funeral Home in Fairfield.

Memorials may be made to the St. Judes Children Hospital (sic - St. Jude Children's Research Hospital) or to a charity of your choice.

Arrangements are in the care of Raymond Funeral Home and Cremation Service in Fairfield.

Online condolences to the family may be made through www.raymondfuneralhomes.com. 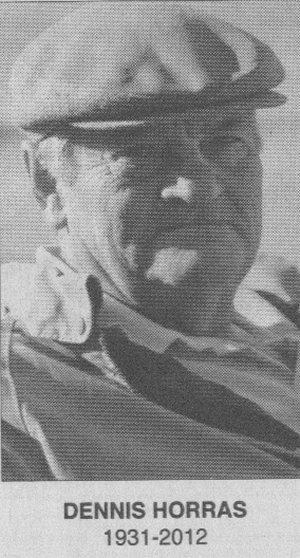