A funeral will be at 10:30 a.m. Friday at First United Methodist Church in Fairfield, with the Rev. Medea Saunders officiating. Burial will be in Memorial Lawn Cemetery.

Visitation will start at 4 p.m. Thursday at the funeral home, where the family will be present from 5-7 p.m.

In lieu of flowers, memorials may be made to SunnyBrook Living Care Center and First United Methodist Church in Fairfield. Cards and memorials may be sent to 3601 S.W. Jona Circle, Ankeny 50021.

In 1908, the RABEL family moved to a farm in Jefferson County. Mrs. LAWSON graduated from Fairfield High School in 1925 and subsequently taught school for four years in a rural country school. After marrying, the LAWSONs made their lifelong home in Fairfield. Mrs. LAWSON was a homemaker for many years. In 1945, the couple purchased the Fairfield Motel and Restaurant on the western edge of the city. They operated the motel and restaurant until 1956, when they converted the properties into their home and long-term rental apartments. Mrs. LAWSON managed the rental properties for the next 50 years. In 2004, she fell and broke her hip and then moved into the care center.

Mrs. LAWSON was a member of First United Methodist Church and United Methodist Women. She also was active in Rebecca Lodge No. 96 of Jefferson Lodge No. 4 and Independent Order of Odd Fellows, where she held many offices including noble grand.

Survivors include four sons: Richard and wife Joan of Clifton, Va., Eugene of Bettendorf, Warren and wife Bobbie of Ankeny and Roger and wife Susan of Tucson, Ariz.; 11 grandchildren; and 12 great-grandchildren.

In addition to her husband, she was preceded in death by one daughter-in-law: Jeanie LAWSON; one granddaughter; her parents; and four sisters: Grace ROBERTS, Lucille HUDGEL, Pauline TURPIN and Gertrude DICE.

Visitation will start at 4 p.m. Thursday at Behner Funeral Home, where family will be present from 5-7 p.m.

Incomplete information appeared in the obituary in Tuesday's Ledger.

Note: At the time of her death, Wilma was the county's oldest resident. The title now passes to Genevieve DRISH. 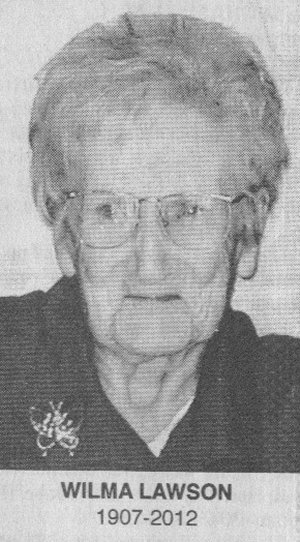