A private family service is planned. The body will be cremated.

A guest register may be signed from 9 a.m. to 5 p.m. Wednesday at Behner Funeral Home in Fairfield. It also may be signed online at www.behnerfh.com .

In lieu of flowers, memorials may be made to the Fairfield High School Athletic Department to the attention of Pam Mitchell, 605 E. Broadway Ave., Fairfield 52556.

Mr. HINKLE graduated from Fairfield High School in 1969 and attended Truman State Teacher's College. He lived his entire life in the Lockridge community and was a farmer on the family farm.

Survivors include his cousins, aunts and uncles.

Note: Duane had gone missing on Thursday, January 12th. Over the next two weeks many people searched his 800-acre farm for him and followed up on leads, but to no avail. A more intensive foot-based search was organized on January 26th, and Duane's body was found in a crevice on his property. Earlier searches in that area revealed nothing, and it is thought he was covered by snow at the time. Foul play is not suspected in Duane's disappearance; the man who found him related Duane 'looked peaceful', as though he was sitting in a favorite place waiting to watch the sun come up.

2016 addendum: Duane's ashes were interred in Union Free Cemetery near Germanville beside his parents; he is also noted on his parents' gravestone. 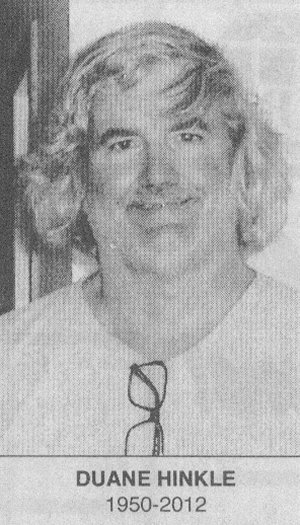