A funeral will be at 10:30 a.m. Monday at Richland United Methodist Church, with the Rev. Kim Gates officiating. Burial will be in Richland Friends Cemetery.

Memorials to Richland United Methodist Church or the SunnyBrook activity fund may be left at the funeral home or church or may be mailed to the family at 10460 Juan Calle, Clive 50325.

Mrs. ALLEN grew up in the area and graduated from Richland High School in 1935. She attended business school in Ottumwa before marrying. She worked in Ottumwa for a time and then moved to Muscatine, where she worked during the war. The ALLENs returned to Richland, where they owned and operated Allen Chevrolet. Following her husband's death, Mrs. ALLEN sold the business, but continued to work at Hadley Chevrolet.

Mrs. ALLEN was a member of Richland United Methodist Church.

She enjoyed reading and sewing.

Survivors include one son, Steve ALLEN and wife Tanna of Clive; and two granddaughters.

In addition to her husband, she was preceded in death by her parents and one son, Bill. 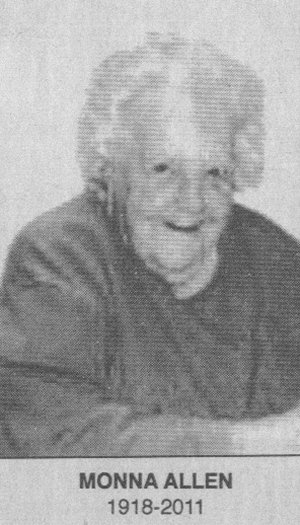