Funeral Services will be 10:30 Wednesday May 4, 2011 at the Behner Funeral Home in Fairfield with Rev. Ed Parker officiating. Burial will be at Lockridge Cemetery in Lockridge, Ia.

Richard Lee VORHIES was born May 31, 1938 to Clarence M. and Doris BOTTORFF VORHIES in Fairfield, Iowa. He married Patricia Ann TIETGE-POWERS on Nov. 27, 1987 at his home in Lockridge.

Richard was a lifelong resident of Jefferson County. He worked for Robertson Ceco Buildings for 25 years. His hobbies and interests include the St. Louis Cardinals, motorcycles, Harley Davidson memorabilia, going to stock car races, and spending time with the grandchildren. He was affiliated with the Baptist church, and was a member of Eagles Lodge #1927 in Fairfield, Ia.

Note: First wife Marita's maiden name was MULLIN; she died in 1985 and is buried in Lockridge Cemetery also. 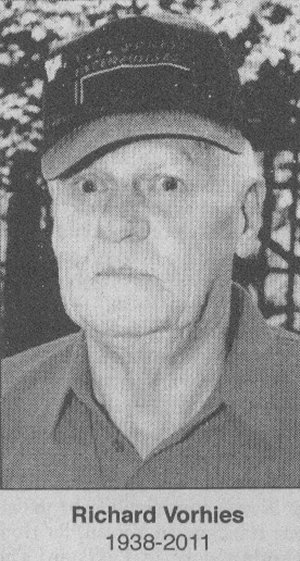