REINIER, Patricia Ann -- Patricia Ann REINIER, 89, formerly of Ollie, died Friday, December 3, 2010, at the Parkview Care Center in Fairfield, Iowa. She was born on December 9, 1920, in Scott County, Iowa, the daughter of Glenn E. and Ora Jane JOHNSTON MIDDLEKAUFF. Patricia graduated from the Ollie High School with the class of 1937 where she was valedictorian. She then attended college for two years at William Penn College in Oskaloosa, Iowa, and taught in country schools in the Ollie area. On December 21, 1940, she was united in marriage to Rex C. REINIER at Ottumwa, Iowa. Rex passed on April 29, 2001. Following their marriage, the couple moved to a farm near Ollie. She was a homemaker and worked on the farm with her husband.

Patricia was a member of the Ollie Eastern Star, the Prairie View United Methodist Church, and the I'll Be Seeing You Club. She enjoyed camping and especially the Iowa State Fair, gardening, crafts, and wiener roasts. She and Rex wintered in the Pleasant Valley Trailer Park in Alamo, Texas, for many years.

Patricia's family was the center of her life. Her family includes her children and their spouses: Glendajayne and Jim LATCHAM of Hedrick, Nancy and Bob WINN of Ollie, Kevin REINIER of Ollie, Norman and Grace REINIER of Newton, and Patty Sue BARNES of Ottumwa; fourteen grandchildren; thirty-five great-grandchildren; and three great-great grandchildren; a brother and his wife, Norman and Betty MIDDLEKAUFF of Cedar Rapids; and many nieces and nephews.

In addition to her husband, Patricia was preceded in death by her parents; a grandson, Tim HUTTON; a son-in-law, Bob HUTTON; and her step-mother, Lucyle MIDDLEKAUFF.

Visitation will be at the Fremont Funeral Chapel on Tuesday, December 7, from 12:00 Noon until 7:00 P.M., with family present from 5:00 to 7:00 P.M. to greet friends and relatives. Funeral services will be Wednesday, December 8, 2010, at 10:30 A.M., in the Prairie View United Methodist Church near Ollie, with Pastor David Peterson officiating. Burial will be in the Rock Creek Cemetery near Ollie. The Fremont Funeral Chapel is in charge of arrangements. 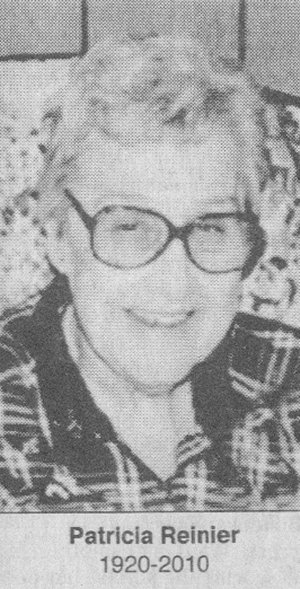