A funeral is set for 10 a.m. Monday at First Presbyterian Church in Mount Pleasant. Burial will be in the Forest Home Cemetery.

Open visitation will be from 1-6 p.m. Sunday at Olson-Powell Memorial Chapel in Mount Pleasant. No family visitation is planned.

In lieu of flowers, memorials have been established to the First Presbyterian Church and Founders' Chapter A of TTT. Online condolences may be sent to www.olsonpowell.com.

Mrs. LOOKER was a lifetime resident of Mount Pleasant, where she graduated from Mount Pleasant High School and Iowa Wesleyan College.

She was a homemaker. At one time she worked part time at Spurgeons and J.C. Penney.

Mrs. LOOKER's other memberships include the Founders' Chapter A of TTT, Chapter NZ of P.E.O., the Beta Chapter of Alpha Xi Delta Sorority, the Mentor Club, the Wednesday Club and the Pleasantique Chapter of Questers. She also served as a leader in the Girl Scouts and the Boy Scouts and was a Midwest Old Threshers volunteer for 50 years.

In addition to her many memberships, Mrs. LOOKER served on the Henry County Hospital Board and the Iowa Wesleyan Alumni Board.

Her hobbies included needlepoint, craftwork, playing bridge and spending time with her family.

In addition to her husband, she was preceded in death by her parents and one sister, Mary EWART. 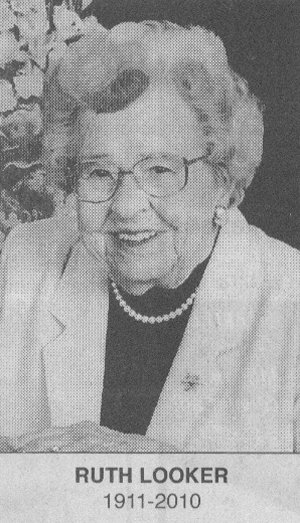