A service will be at 10:30 a.m. Thursday at Faith Lutheran Church in Mount Pleasant, with the Rev. Mike Scudder officiating. Burial will be in Lockridge Cemetery.

Visitation will be from 2-7 p.m. Wednesday at Murphy Funeral Home in Mount Pleasant. Family visitation will precede Thursday's service at the church.

In lieu of flowers, memorials may be made to Faith Lutheran Church.

Online condolences may be sent to the family at www.beattymurphyfh.com.

Mrs. FENTON was born Nov. 17, 1917, at Four Corners, the daughter of Fredrick Lewis and Minnie Mae KIRK TRABERT. She married Robert J. PETERSON Feb. 17, 1938, at St. Johns Lutheran Church at Four Corners. He preceded her in death in 1979. She married Bill FENTON April 17, 1982, at Faith Lutheran Church in Mount Pleasant. He preceded her in death in 2005.

Mrs. FENTON attended country grade school at Four Corners and then Lockridge High School until her family moved to Wayland in 1934. She graduated from Wayland High School in 1936. She was a homemaker and foster mother.

Mrs. FENTON was confirmed at St. Johns Lutheran Church. She was a member of Faith Lutheran Church, Ladies Aid and Lutheran Women's Mission League. She taught Sunday school for more than 20 years and sewed quilts for Lutheran World Relief.

Mrs. FENTON enjoyed music and camping. She also liked flowers. She sang with the Kitchen Clatter Band and Rhythm Rockers.

In addition to her husbands, she was preceded in death by her parents; one brother, Donald; and one sister and one brother at birth. 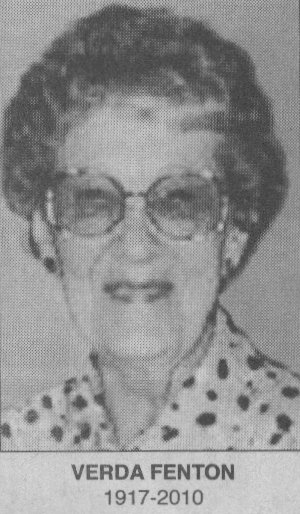