Arrangements are pending at Pedrick Funeral Home in Keosauqua.

A service will be at 2:30 p.m. Wednesday at Keosauqua United Methodist Church, with the Rev. Douglas Harding and Larry Shipley officiating. Cremation will follow the service, with burial at a later date in Purdom Cemetery in Keosauqua.

Memorials to Keosauqua United Methodist Church or Friends of Lacey may be left at the church or may be mailed to the family at 218 S. First St., Keosauqua 52565.

Mrs. LANMAN graduated from Bonaparte High School in 1940. She worked at the Bonaparte Glove Factory and Sheaffer Pen & Pencil in Fort Madison in wartime production of airplane radios. She graduated as a cadet nurse from Saint Joseph School of Nursing in Ottumwa at the end of World War II. She worked at Jefferson County Hospital in Fairfield until moving to Keosauqua in 1948. After raising her family, Mrs. LANMAN wofked as a charge nurse at Van Buren Good Samaritan Center in Keosauqua from its opening in 1972 until retiring 15 years later.

She was preceded in death by her parents; her husband; one daughter, Larissa Jane LANMAN; and one grandson. 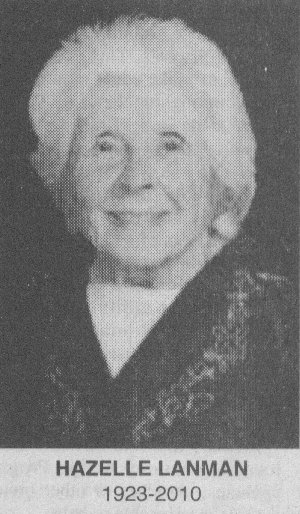