A service will be at 10 a.m. Friday at Olson-Powell Memorial Chapel in Mount Pleasant, with the Rev. Jim Luder officiating. Burial, with full military rites, will be in Oakland Mills Cemetery.

Visitation began at 2 p.m. today at the memorial chapel, where the family will be present from 5-7 p.m.

In lieu of flowers, memorials may be made to the Jerry Hanshaw Memorial, which will support his children's education.

Online condolences may be left at www.olsonpowell.com.

Mr. HANSHAW graduated from Fairfield High School and attended Indian Hills Community College for two years. He worked as a policeman in Washington, Iowa, for 10 years and for the past 22 years was manager of the Sirloin Stockade in Mount Pleasant. He retired Jan. 1, 2009.

Mr. HANSHAW enlisted in the United States Army and served in Vietnam with the 61st and 71st Air Defense Artillery.

He was a member of Veterans of Foreign Wars Post No. 58, Salem Masonic Lodge and Moose Lodge 1003 in Mount Pleasant.

He was preceded in death by his parents; one daughter, Gretchen Rae HANSHAW; and one brother, Larry HANSHAW. 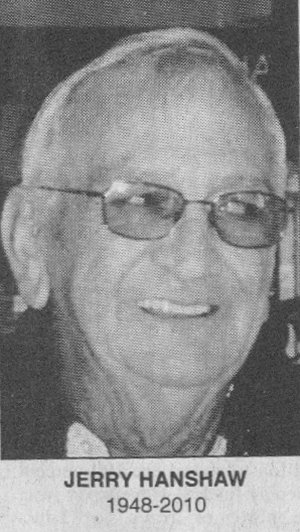