BOYCE, Harlan W. 'Worth' -- Harlan W. "Worth" BOYCE, 91, formerly of Fairfield, died from complications of a stroke Saturday, May 22, 2010, at Karen Acres Health Care Center in Urbandale.

A funeral will be at 10 a.m. Friday at Westover Baptist Church, with the Rev. Ken Wallace officiating.

A graveside service will be at 3 p.m. Friday at Memorial Lawn Cemetery in Fairfield.

Family visitation will be from 5-7 p.m. Thursday at Westover Baptist Church.

Memorials may be made to Westover Baptist Church for camp scholarships.

During World War II, Mr. BOYCE served in the United States Marine Corps in the South Pacific. He was wounded on Okinawa in 1945, awarded a Purple Heart and honorably discharged in 1946 with the rank of corporal.

In 1950, Mr. BOYCE graduated from Burlington Iowa Jr. College. He received a bachelor's degree from Iowa State College in 1953 and a master's degree in 1959. He worked at Fairfield Glove Company in Fairfield; Douglas Aircraft in Long Beach, Calif.; and Six's Foundry in Fairfield. He also worked for the Des Moines Independent School District as a vocational teacher at Des Moines Technical High School for 28 years, retiring in 1981. He sponsored the high school's student guide and hall monitor programs. While in school, Mr. BOYCE contracted building repair and cabinet making jobs and served with an asphalt crew repairing streets and building driveways.

Mr. BOYCE was a member of the Society of Manufacturing Engineers and a life member of the National Education Association. He was a charter member of Westover Baptist Church in Des Moines, where he served in many leadership capacities. He sponsored youth groups for several years and was involved in mission trips to Montana, Nova Scotia and Haiti.

Survivors include his wife; one son, Stephen Paul BOYCE and wife Sharon of Elgin, Minn.; one stepgrandson; and one stepgreat-granddaughter.

He was preceded in death by his parents and three brothers, Samuel Edward, Kenneth Paul and Rufus Franklin. 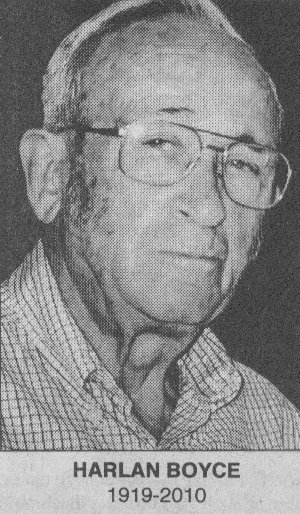