LANGSTAFF, Petronell Anna -- Nellie LANGSTAFF, 91, passed away on Tuesday, April 20, 2010. She was born January 14, 1919 in Detroit, Michigan to Albert and Petronella HERZOGENRATH HAZELAAR. Her father was an engineer who was close to Henry Ford and Thomas Edison. After her mother died in 1926, Nellie and her three sisters were raised by a stepmother Clara. Nellie attended Michigan State Normal College, but her education was interrupted by WWII when she worked as a draftsman in a bomber plant in Detroit.

Nellie married Donald LANGSTAFF in 1944 and he returned from his duty in the Navy in 1946 to become a dentist. Together they raised three children, Don Jr., Harry and Gretchen. Dr. LANGSTAFF passed on in 1998.

Nellie was a loving, devoted and hard working mother who was proud of her children and grandchildren. She raised her family to love nature and music. Nellie could identify every mid-west songbird. Her great passion was contributing to world peace through her daily meditation.

Nellie spent time with Maharishi Mahesh Yogi in the 1970's and she felt that the practice of TM transformed her life and gives us the promise of a more peaceful world.

She is survived by her sisters, Violet JEWETT and Viola KIPP, her son, Don Jr., daughter, Gretchen SCHAFFER, three grandchildren, three great grandchildren and ten nieces and nephews whom she loved dearly. In addition to her husband, Nellie was preceded in death by her son Harry, four baby girls who died in early infancy and her sister Catherine.

Nellie has asked that we thank all of her dear friends who have helped her so much over the years and to let them know that she loves them.

Online condolences can be left at www.behnerfh.com or messages can be sent to 707 E. Burlington Ave., Fairfield. 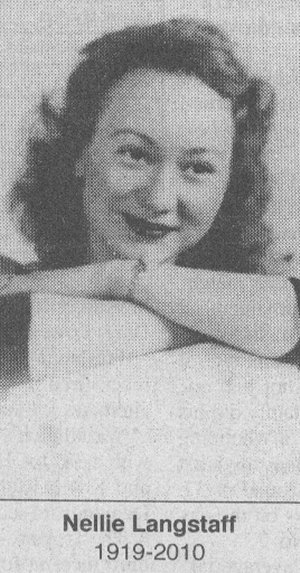