A memorial service will be at 11 a.m. Wednesday at First Presbyterian Church, with the Rev. Joseph Phipps officiating. The body has been cremated. Burial of cremains will be in Evergreen Cemetery.

A Masonic service will be at 10 a.m. Wednesday at the church, followed by visitation until 11 a.m.

Mr. KOCH was raised in the Germanville area, southeast of Brighton. He graduated from Brighton High School in 1943. He was a reporter and photographer for the Washington Evening Journal before moving to Fairfield in 1957. Mr. KOCH owned and operated a radio-television service. He worked for Crandall's Electric before working many years at Acco-Louden, and he was an independent field service contractor. Mr. KOCH retired in 1991 from Agri-Industrial Plastics Co.

Mr. KOCH was a 50-year member of Masons and was a past master of Naaman Lodge 613 in Brighton and Clinton Lodge No. 15 in Fairfield. He was a member of First Presbyterian Church, where he served as an elder and on various committees.

Survivors include one son, M. Jay KOCH and wife Lynnette of Ottumwa; two daughters, Gail GAUS and companion Terry Padgett of Fairfield and Jill RIPPERGER and husband Scott of Ames; two grandsons; one great-granddaughter; and one sister, Leta CHALUPA of Washington, Iowa.

In addition to his wife, he was preceded in death by his parents. 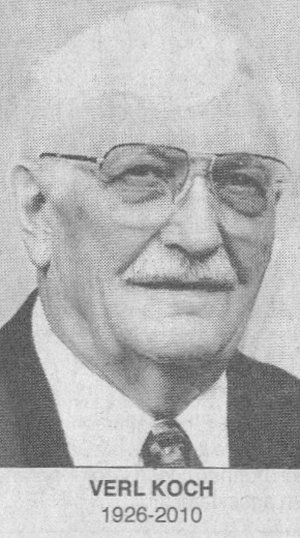