A memorial service will be at 11 a.m. Saturday at Christ United Methodist Church in Douds, with the Rev. Ann Donat officiating. The body has been cremated. Burial will be in Leando Cemetery.

Family visitation will be from 9:30-11 a.m. Saturday at the church.

Memorials to Christ United Methodist Church, Douds Community Club or the Leando Cemetery fund may be left at the church or may be sent to the family at 685 W. Main St., Marengo 52301.

Pedrick Funeral Home in Keosauqua is in charge of arrangements.

Mr. HARRYMAN grew up in the Douds area, attended rural school and graduated from Douds-Leando Consolidated School in 1927. He briefly attended Iowa State College and taught school at Valley Country School for three years before attending Iowa State Teachers College, now University of Northern Iowa. He also taught junior high at Delhi. He earned his bachelor's degree in 1936 and taught junior high school and later high school in Cedar Falls. He returned to help farm following the death of his father in 1938. Mr. HARRYMAN began a lay ministry in 1947 and then attended Perkins School of Theology in Dallas, Texas. He received his ordination as a deacon and then as an elder in 1955. He then served as pastor or associate pastor of many churches, including those in Milton, Cantril, Mount Sterling, Lebanon, Seymour and Promise City. He also served at First United Methodist Church in Ames and First Methodist Church in Newton. He retired in 1974.

Mr. HARRYMAN traveled with his family through most of the 50 states, Europe, the Holy Land, Mexico, the Caribbean and the Panama Canal. He and his wife wintered in Florida for more than 20 years.

Survivors include two daughters, Marilyn RODGERS and husband Dean of Marengo and Shirley YOUNKER and husband Donald of Green Valley, Ariz.; three grandchildren; and one great-grandson.

In addition to his wife, he was preceded in death by his parents; his stepmother, Lucy A. BREWSTER HARRYMAN; one son, Merlin HARRYMAN and wife Marilyn; four brothers, Harvey, Joe, Dewey and Lucien; and four sisters, Lottie Ruth HARRYMAN, Esther MOORE, Mary LOVELESS and Josephine HORN LEWIS. 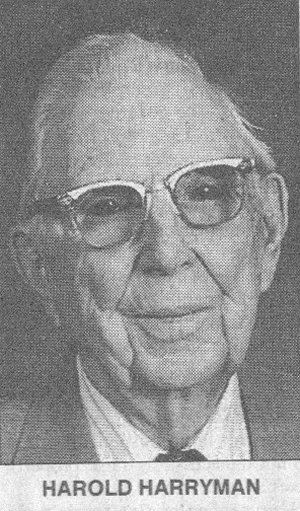