HARTMAN, Richard -- Richard A. HARTMAN, 73, of Fairfield, died Monday, Jan. 11, 2010 in his home. Services are pending at Elliott Chapel in New London.

The funeral service will be at 2 p.m. Friday at Elliott Chapel in New London with the Rev. Raymond Ellerd officiating.

Interment will be at Burge Cemetery in New London with military rites by the Henry County Honor Guard. A visitation will begin at noon Thursday at Elliott Chapel with the family present from 6-8 p.m.

Mr. HARTMAN served in the Navy on the USS Jason in San Diego, Calif. He was employed in maintenance at ACCO Crane and Monorail in Fairfield until his retirement. He enjoyed camping and fishing with his brothers on the Mississippi River.

In addition to his wife, he was preceded in death by his parents; one brother, Lester HARTMAN Jr.; and one sister, Alice WILEY. 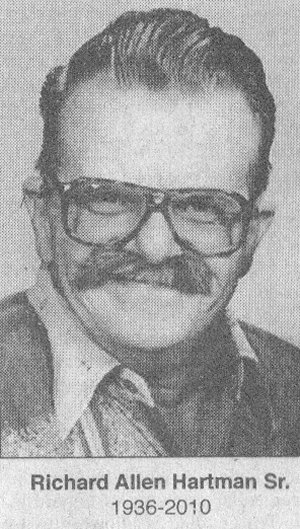