A memorial service will be held 2:00 PM Wednesday, December 23, 2009 at the First United Methodist Church in Fairfield with Rev. Mike Metz officiating. Following the service, a time of fellowship will be held in the church basement with the family in attendance.

Grace Edna GRABER was born in Cantril, IA on November 29, 1929, the daughter of Arthur and Florence B. (WARREN) CONRAD. She graduated from Fairfield High School with the Class of 1947 and was united in marriage with Harold D. GRABER on November 22, 1951 in Fairfield. They made their home in Fairfield from 1951-1976, and then moved to rural Lockridge.

In addition to being a devoted wife, mother and homemaker, Grace taught rural school in Salina and Center schools, both north and south of Fairfield for a total of five years. She volunteered her time as a private tutor, teaching reading and the English language to immigrant adults and children for 20 years. She hosted nature tours on the family farm for school children. Grace was an avid landscape painter for over 30 years, using hand saws and barn boards as her canvas. She was a member of Questors and the Jefferson County Historical Society. She had great faith in Jesus and was a member of the First United Methodist Church, where she taught Sunday School and sang in the choir for 20 years. 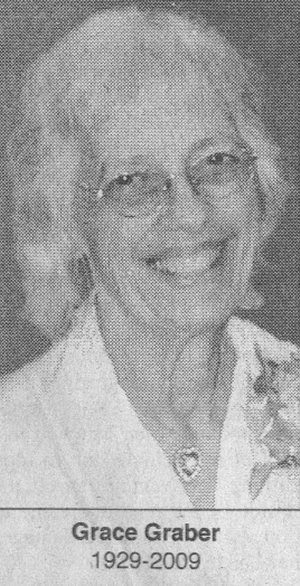