Arrangements are pending at Gould Funeral Home in Richland.

A funeral will be at 10:30 a.m. Saturday at Woolson Friends Church near Richland, with the Rev. Harlan Van Voorst officiating. Burial will be in Richland Friends Cemetery in Richland.

Visitation will begin at 4 p.m. Friday at Gould Funeral Home in Richland, with the family present from 6-8 p.m.

Memorials have been established for Woolson Friends Church, Hospice of Davis and Wapello Counties and Christian Harness Horse Association.

Mrs. HINSHAW's family moved to Ollie when she was very young, and she graduated from Hedrick High School in 1940. She worked as a telephone operator prior to her marriage. She and her husband owned and operated a farm, gas station, bulk fuel plant, feed store and restaurant. They also raised champion Standardbred horses.

She was preceded in death by her parents and two brothers, William "Bill" TRIGG and Paul TRIGG. 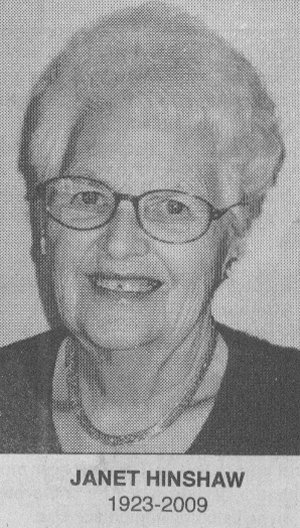