A service will be at 2 p.m. Tuesday at Behner Funeral Home in Fairfield, with the Rev. Ed Parker officiating. Interment, with military rites, will be in Memorial Lawn Cemetery in Fairfield.

Visitation will be from 1-2 p.m. Tuesday at the funeral home.

Mr. FLEMING attended grade school in Kalona and high school in Farson. He lived most of his life in Fairfield. He was employed by the Universal Producing Company from 1946-1990 and retired as plant manager. He received a diploma from the National Radio Institute of Washington, D.C., in 1955, and operated Bill's Radio and Television Shop out of his home for several years. He also managed the Agency Roller Rink with his wife from about 1979-1981.

Mr. FLEMING was a United States Army Air Force veteran of World War II, having served as a radioman and technician.

He liked to fish, bowl and camp, but he most enjoyed spending time with family.

He was preceded in death by his parents; his wife; one son, Gary FLEMING; two grandchildren; two brothers, Richard FLEMING and Charles FLEMING Jr.; and one sister, Orris Irene FLEMING. 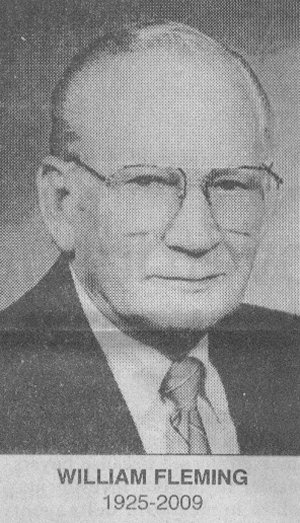