A service is planned for 2 p.m. Dec. 20 at First Lutheran Church in Fairfield, with interment to follow in Memorial Lawn Cemetery.

Family visitation will be from 6-8 p.m. Dec. 19 at Behner Funeral Home in Fairfield.

Cards and memorials made to First Lutheran Church, Fairfield Senior Citizen Center or the Leukemia Society may be sent to 1759 200th St., Fairfield 52556.

Biographical information is pending at this time.

A funeral is planned for 2 p.m. Saturday at First Lutheran Church in Fairfield, with the Rev. Martin Robeck officiating. Burial, with military rites, will be conducted at Memorial Lawn Cemetery.

Family visitation will be from 6-8 p.m. Friday at Behner Funeral Home in Fairfield.

Mr. KRUMBOLTZ lived all his life in the Fairfield community. He graduated from Fairfield High School in 1931. He was a member of the National Guard 133rd Infantry Band from 1931-1938.

Mr. KRUMBOLTZ was a lifelong farmer and was among the first to do contour farming. He retired from farming in 1984.

Mr. KRUMBOLTZ was a member of First Lutheran Church in Fairfield. He was a Farm Bureau member and was a charter member of both the Soil Conservation Association and the Fairfield FFA. He was a member of the Trail Ride to the Iowa State Fair Centennial Celebration, Square Dance Club and International Order of Odd Fellows. He played in the Fairfield Municipal Band for many years.

He enjoyed fishing and camping on the Skunk River and spending time with his children and their families. He also enjoyed traveling and wintered in Texas.

In addition to his wife, he was preceded in death by his parents and four siblings, Edna GRABY, Clara McWHIRTER, Mabel KRUMBOLTZ and Merlin KRUMBOLTZ. 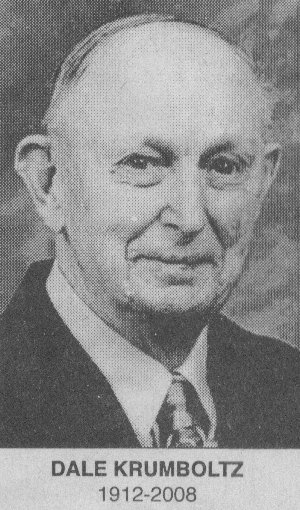