"If you're like me every time you start a campfire, tie a taut-line hitch or cook a meal outdoors, you can't help but recall your days as a Boy Scout in Fairfield," said Jim Larson of Chicago.

"I grew up in Fairfield in the 1970s," continued Larson. "Before leaving to attend college, I was active in Troop 64, which was sponsored by the local First United Methodist Church. The adult leadership of the troop was superb and responsible, in no small measure, for helping several dozen local boys earn their Eagle Scout badge -- myself included. One of those leaders was Jerry DAVIS, who recently passed away."

According to Larson, DAVIS was involved with Boy Scouts far longer than the time his own son, Dan DAVIS, was in scouts and helped shape the lives of hundreds of boys, many who went on to become leaders in their communities and careers.

"Jerry was a devout family man who, in addition to teaching outdoor skills, lived his life in a manner that exemplfied scouting values," said Larson. "Slow to anger and always willing to provide instruction to rambunctious kids, Jerry gave up vacation time to take boys to summer camp at Camp Wapello near Drakesville or on high adventure trips to Philmont, not to mention monthly weekend camping trips throughout southeast Iowa."

The new campership fund in DAVIS's honor recognizes his dedication as a scout leader, explained Larson.

"Jerry loved scouting," said his widow LuAnn DAVIS of Fairfield, adding he would have been delighted to be remembered in this fashion.

Anyone who would like to contribute to the fund can send checks payable to "Jerry Davis Memorial Campership Fund" to Libertyville Savings Bank, Attention: Lisa Martin, PO Box 744, Fairfield 52556.

DAVIS worked at Iowa Malleable Iron Company for 40 years and served with the Fairfield Fire Department for 37 years, with four of those years as the fire chief.

In addition to being a Boy Scout leader, DAVIS also had been a member of the Howard Johnson Coffee Club, a Little League coach, a Habitat for Humanity volunteer and a Fairfield Senior Citizen board member.

In the photo below:

Jerry DAVIS, for whom the Jerry Davis Memorial Campership Fund was established, is picture above (sic - as it appears in the paper) with a group of Boy Scouts in 1977 at the Philmont Scout Ranch in New Mexico. From left are, seated: Lyle Marine, Gene Sanders, Jim Larson, Jerry DAVIS; standing: Steve Bekel, Kris Crandall, Alan Peaslee, Jeff Wells, Kent Whitney, Shawn Messer and Bob Harvey. 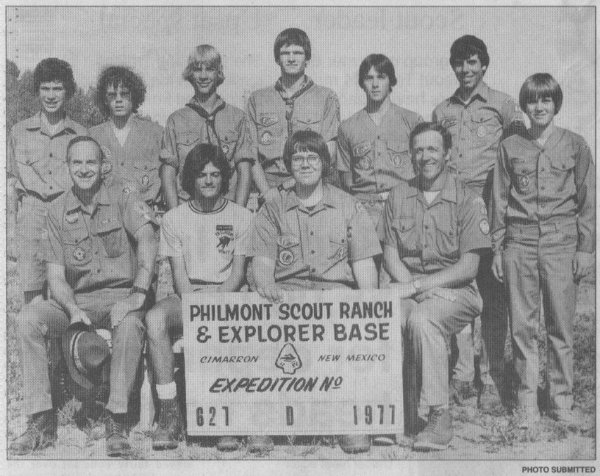