Andrew W. ANDERSON, who for many years was identified with agricultural pursuits in Jefferson county, was one of the estimable citizens Sweden has furnished Iowa. His birth occurred on the 14th of February, 1856, his parents being Karl and Mary C. (ANDERSON) ANDERSON, also natives of Sweden. The father engaged in farming in his native land until 1877 when he and his wife emigrated to the United States. During the early months of his residence here he worked at various occupations by the day, subsequently obtaining a position in a section crew on the Chicago, Burlington & Quincy Railroad. He was accidentally killed while at his work by a passing train, about 1879. The mother later married Joseph PETERSON and continues to make her home in Lockridge.

The first sixteen years of his life Andrew W. ANDERSON spent amid the scenes of his birth, obtaining his education in the common schools of his native land. An ambitious, energetic lad, he was not content with conditions in the old country and from his earliest youth directed his efforts toward acquiring sufficient money to bring him to America, the land, as he felt, not only of promise but of fulfillment. His dream was realized in 1872 and he crossed the Atlantic with the United States as his destination. Upon his arrival here he made his way inland to Jefferson county, where an uncle, John ANDERSON, owned and operated a farm located in Lockridge township. He immediately obtained employment by the month as a farm hand, and for many years was in the service of Mr. John Heron. He never forgot his parents in the old country and sent them a portion of his wages each month until they, too, were able to become citizens of the new world. By means of industry and thrift he eventually accumulated sufficient capital to enable him to begin operations for himself and he rented the farm of John ANDERSON, which he cultivated for two years. Intense and attentive cultivation proved as remunerative under his capable supervision that he was in a position at the expiration of that period to buy eighty acres of land in Round Prairie township. He continued to operate this place until 1901, and in April of that year he sold his farm and moving to Lockridge purchased one and a quarter acres of land, upon which he erected a fine residence. There he lived, retired, enjoying the ease and comfort provided by the fruits of his early toil, until he passed away on Thursday, February 24, 1910.

For his wife Mr. ANDERSON chose Miss Carrie D. REEDER, to whom he was united on March 27, 1884. Mrs. ANDERSON is a daughter of Lewis and Sarah S. (SHANBERGER) REEDER, natives of Germany. The father emigrated to this country in a very early day, first locating in Pennsylvania whence he later removed to Jefferson county, where he bought and operated a farm during the remainder of his active life. In 1885 he retired to Lockridge and there he passed away four years later at the age of seventy-seven years. Mrs. REEDER had passed the eighty-seventh milestone on life's journey at the time of her demise on October 4, 1907. The father was one of the prominent citizens of the county, always having taken an active part in all political affairs, and for some years represented his district in the state assembly.

Mr. ANDERSON always gave his political support to the republican party, but was too deeply engrossed in the development of his private interests to figure as candidate for any public office in his township. He was an earnest member of the Lutheran church, as is also his widow, who numbers among the members of its congregation many friends of long years standing. 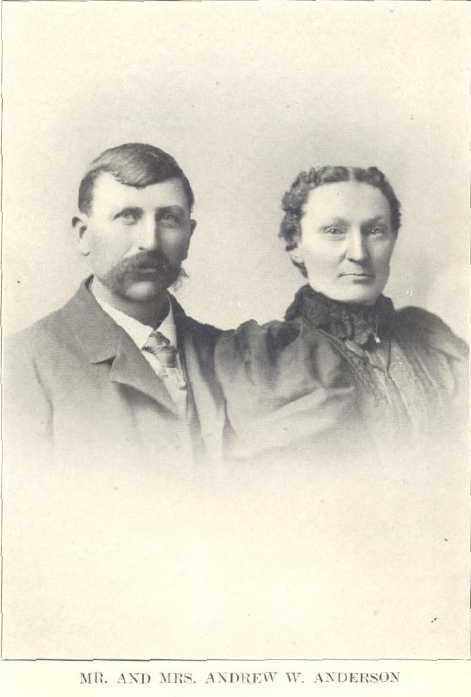