Vivolyn Maxine Ross Van Elderen of Grand Rapids, Michigan, died on Monday, March 21, at the age of 95. She was born in Wellsburg, Iowa, the first child of Albert and Viola Ross, and later the stepdaughter of Jennie Ross.

In the 1940s she took a job teaching elementary school in Ripon, California, where she met and married Bastiaan Van Elderen in 1945. They later moved to Grand Rapids, so Bas could continue his education. Viv was a sought-after Bible study teacher, and led women's groups at many churches in the Grand Rapids area. She was a longtime active member of First Christian Reformed Church. In the 1960s and 1970s she and Bas spent many years in the Middle East while he pursued his archaeological work in Jordan. During the last six years of his teaching career they lived in Amsterdam, finally retiring to Grand Rapids in 1990. After Bas's death, Viv moved to Raybrook Manor, where she lived first in Assisted Living, then in the Cook Center, and finally in the 4th floor nursing unit until her death. Though her last years were plagued with dementia, she maintained her friendly outlook toward staff and fellow residents.

In addition to her parents and stepmother, Viv was preceded in death by her son Marlin in 2000, her husband Bas in 2004, and her brother Russell Ross in 2011.

The staff at Raybrook, both in the Cook Center and on the fourth floor, were like family to her, and we are grateful for their consistent and loving care. Viv personified her name -- she was vivacious, talkative, and loved a good hearty laugh. Hospitality was a form of ministry for her, and she extended it warmly to generations of Calvin Seminary students, faculty colleagues, visitors to Amsterdam and the Middle East, and countless others. Though she lived in many exotic places, she was always a small-town Wellsburg girl at heart. Funeral services will be held on Thursday, March 24, 11:00 AM at Zaagman Memorial Chapel, 2800 Burton St. SE, with Rev. Pete Van Elderen officiating. Visitation will be Wednesday, March 23 from 3:00-6:00 PM at the chapel as well as one hour prior to the service on Thursday from 10:00-11:00 AM. Memorial contributions may be made to Samaritan's Carriage, 2301 Chelsea Dr. NE, Grand Rapids, MI, 49505. 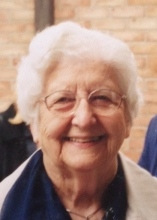