Gordon C. Sloth, 89, of Dike, passed away on Wednesday, March 30, 2016 at UnityPoint Health-Allen Memorial Hospital in Waterloo. Visitation will be held from 5:00 p.m. until 7:00 p.m. on Friday, April 1, 2016 at Engelkes-Abels Funeral Home, Dike Chapel, 680 Main Street in Dike. A remembrance service will held at 7:00 p.m. A funeral service will be held at 10:30 a.m. on Saturday, April 2, 2016 at the Fredsville Lutheran Church in rural Cedar Falls, Iowa. Burial will be held at the church cemetery with graveside military rites by the Dike American Legion Post# 471.

Gordon C. Sloth was born December 20, 1926 near Vorhees, Iowa to S. Chris and Christine Neilsen Sloth. The family moved to a farm south of Dike where he started school and graduated in 1944. After graduation, he joined the United States Navy during W.W. II and served on a minesweeper in the South Pacific. On February 8, 1947 he was united in marriage Catherine Laura Middlekauff at the Dike United Methodist Church. She passed away on July 4, 1998. On November 27, 1999 he married Janice Deanne White at Fredsville Lutheran Church. He worked at and owned the Dike Hardware Heating and Plumbing for over 50 years, and also was a lifelong farmer. Gordon was a lifelong member of the Fredsville Lutheran Church. He was a member of the Dike American Legion Post #471 for 71 years and a member of the Danish Brotherhood for 69 years. He also proudly belonged to the 40 & 8 and the Grundy County Fat Hog Club. He was on the original board of the Golden Valley Low Rent Housing. Gordon enjoyed playing cards and wintering in Arizona almost as much as fishing on Kabetogama.

In addition to his parents and his first wife Catherine, he was preceded in death by his sister, Agnes Andersen; and his brothers, Elvin and Verner Sloth.

In lieu of flowers, memorials may be directed to the Fredsville Lutheran Church Building Fund or an organization of your choosing. 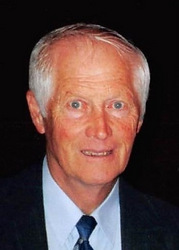