Wilma was born on February 12, 1923, in Holland, Iowa, the daughter of Richard & Dena (Sealman) Kiewiet. She attended country school in Holland and later attended the Grundy Center High School, graduating with the class of 1941. After High School, Wilma attended Pitzi's Beauty School in Waterloo. On June 4, 1948, Wilma was united in marriage to Raymond Wolthoff at the Colfax Center Presbyterian Church in Holland. The couple welcomed two daughters into their family. Wilma began her long career as a beautician, working out of the shop in her home called the East End Beauty Shop. She retired in 2006, working in Grundy Center for over 60 years.

She was a member of the Bethany Presbyterian Church in Grundy Center. Wilma enjoyed knitting, crocheting, cooking, baking and had a love of birds. She also enjoyed vegetable and flower gardening, and canning. She loved children, especially her grandchildren and great-grandchildren. She will be dearly missed by those she leaves behind. 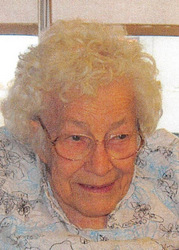