Julia Marie Lage, 96 of Gladbrook, IA, passed away on Thursday, October 22, 2015 at Westbrook Acres in Gladbrook. A funeral service will be held at 10:30 a.m. on Monday, October 26, 2015 at the Salem Church of Lincoln, with visitation held one hour prior to the funeral service at the church. Burial will be at the Reinbeck Cemetery. Memorials may be directed to the family.

Julia was born on February 13, 1919 in Tama County, Iowa to her parents John N. and Isabelle McGowan. She attended Crystal Township #3 Country School. She then graduated from Dinsdale High School in the Class of 1936. Julia went on to graduate from AIB in Des Moines in 1938. Julia worked as a secretary for the Tama County Clerk of Court until she was united in marriage to Raynard Lage on April 8, 1939 in Waterloo, Iowa. Raynard and Julia lived on the Lage family farm in rural Gladbrook and welcomed three sons into their family. They retired to Gladbrook in 1982.

Julia was a long-time member of the Salem Church of Lincoln where she served the church with Living Branches. She was a member of the AMVET Auxiliary and the Local Grandmother's Club. She enjoyed sewing, quilting baking and playing cards. Her true joy in life came from spending time with her family, especially her grandchildren.

She was preceded in death by her parents; husband Raynard; sister Margaret Siemens and brothers John Jr., Raynard and Donald McGowan. 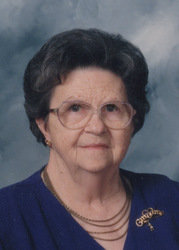