Grace Muller, daughter of Klaas and Annie Eiklenborg Muller was born February 17, 1916 in Dike, Iowa. She received her education from Beaver #7 Country School in Dike, Iowa. On December 17, 1936, she married Alvin A. Stahl in Dike, Iowa. The couple made their home in rural Holland where the couple farmed. Her main vocation was as a homemaker. They moved into the town of Holland in 1963 and in 1999, into the Sunrise Apartments in Grundy Center. Grace had been residing at Grundy County Long Term Care for several years. She enjoyed gardening, cooking, baking and sewing. She also made many quilts for her family through the years. Grace will be remembered for her homemade bread and rolls in which everyone enjoyed. She was a wonderful mother and grandmother. 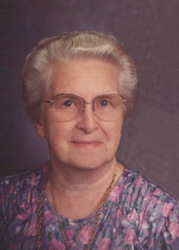