Beryl Eugene Manlick, 76, passed away with his family by his side on Thursday, July 23rd, 2015 at the Parkview Manor in Reinbeck while under the care of Cedar Valley Hospice. A funeral service will be held on Monday, July 27th at 10:30 a.m. at the St. John's Lutheran Church in Reinbeck with Pastor Troy Peperkorn officiating. Visitation will be held on Sunday, July 26th from 4 to 6 p.m. at the French-Hand Funeral Home in Reinbeck. Burial will follow the funeral service at the Reinbeck Cemetery. Memorials may be directed to the family.

Beryl was born on May 21, 1939 in Grundy County, Iowa, the son of Herman & Alma (Zimmerman) Manlick. Beryl, his parents and sisters lived north of Reinbeck for a short time, then moved to Dolliver and later relocated on a farm between Grundy Center and Dike. He attended country school in Dike until the 4th grade and later attended the Dike school system, graduating from Dike High School with the class of 1957. After high school, Beryl began working for the Farmers Coop in Dike for a few years before taking a job working for Grundy County. In 1958, Beryl married his high school sweetheart, Charlyne Barfels at the St. John's Lutheran Church in Reinbeck. They welcomed son Mark and daughter Dorinda into their family. They lived a short time in Dike and when Char's mother passed away in 1963, the family moved to Reinbeck to care for her sister Geraldine, where they have remained ever since. Beryl later took a job with the city of Reinbeck as the Street and Water Superintendent in April of 1966, where he retired from on December 31, 2001 after 35+ years of service.

He was a member of the St. John's Lutheran Church in Reinbeck, was a Reinbeck Firefighter for 25 years, retiring in 1991, served on the Reinbeck City Council and was a current Westview Board Member. Beryl enjoyed camping and fishing, water ball fights with his fellow firefighters, watching sports including the Chicago Bulls and Iowa Hawkeyes, but he especially enjoyed oak woodworking, and building and displaying his homemade Christmas lights decorations. Beryl was a handyman and could build and repair almost anything. He also enjoyed his family, grandchildren, great-grandchildren and friends very much. 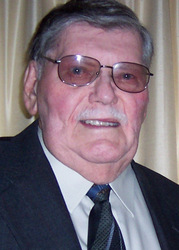