Donna M. Wood, 85, of Reinbeck, Iowa died Saturday, August 1, 2015 at the Covenant Medical Center in Waterloo, Iowa. Funeral services will be held at 10:30 a.m. Saturday, August 8, 2015 at First Presbyterian Church in Reinbeck with Rev. Mike Campbell officiating. Burial will follow at the Reinbeck City Cemetery. A visitation will be held on Friday, August 7, 2015 from 5:00 p.m. to 7:00 p.m. at French-Hand Funeral Home in Reinbeck.

Donna Mae Boege, daughter of Elvin and Elsie Horstmann Boege was born February 7, 1930 in Grundy County, Iowa. Donna graduated from Reinbeck High School in 1947. After graduation, she worked at the Lincoln Savings Bank. Donna married Junior Thede in 1949 and became a full time farm wife. The couple later divorced. She began a 25 year career as a bookkeeper at the Farmer's Cooperative in Reinbeck-Morrison in 1967. Donna married Roy Wood in 1970.

Friends and family have characterized Donna as a true representative of the Iowan character; independent, strong, giving and always concerned with the welfare of others. She was an avid baker, her coffee cake and pecan rolls were enjoyed by many. Donna was active in her church, in the Reinbeck Union Congregational United Church of Christ, then for the last 48 years in the First Presbyterian Church in Reinbeck. She was strong in her faith and practiced the Christian principle of service to others. Donna was a member of P.E.O. for most of her life. She enjoyed spending time with her children and grandchildren, especially their annual trips together on the North Carolina coast. Donna also loved her two cats, Henry and Ralph.

Donna was preceded in death by her husband, Roy Wood and her parents. 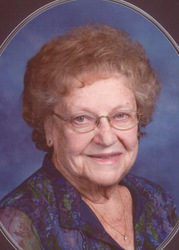