MaryLou was born on September 7, 1935 in Kellerton, Iowa, the youngest child of Axel & Viva (Allen) Jensen. She was raised in Decatur City, Iowa, where her family owned and operated a general store. She attended school in Decatur City, and graduated from high school in Leon, Iowa. After high school, she attended cosmetology school. MaryLou ran a beauty shop out of her parent's home for a short time and eventually she owned a shop on Main St. in Leon. On February 14, 1965, MaryLou was united in marriage to Joel Freeman in Leon, Iowa. The couple welcomed three sons into their family. In 1970, MaryLou and her family settled to Grundy Center.

In addition to being a cosmetologist, MaryLou sold Tupperware for many years and eventually became a Tupperware manager, she was the "Story Lady" for the local library for many years, worked in dietary for the Grundy Hospital and cared for her ailing father for several years.

She enjoyed puzzles and crafts, taking trips to the Meskwaki Casino but most importantly, she loved her family and spending quality time with her grandchildren.

MaryLou is survived by her husband Joel of Grundy Center; sons Jim (Robbie Knight) of Wheat Ridge, CO, Jeff (Shannon) of Grundy Center and John (Carol) of Grundy Center; grandchildren Molli & Emily Craig and Lindsay, Jared & Nolan Freeman; brother Dennis Jensen of Des Moines; many nieces and nephews and a host of many other friends and family. 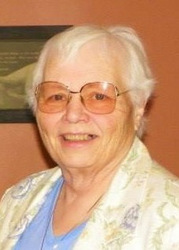